«Spain grinds to a halt as millions of women join unprecedented strike for gender equality«, published the Telegraph yesterday.

The main Spanish unions estimate than around 5 million people joined the first nationwide feminist strike on March 8th, under the motto «If we stop, the world stops».

In the evening, massive marches took place all over the country. Not only in Madrid or Barcelona, which usually attract people from the surrounding areas, but also in smaller cities in almost every province of Spain, a country where machismo is deeply rooted to the core of its society. Even though the most conservative political parties said that the strike «was elitist» but also «was too antiestablishment», the presence of hundreds of thousands of people on the streets clairly showed a different image. Yesterday, women (and men) from all social backgrounds, races and professions marched together for the first time to support the Feminist Movement. «Feminist», a word that still seems to scare so many people.

I marched to protest the precarious employement conditions that affect especially female workers.

I marched to protest the gender pay gap.

I marched for the women who have no freedom.

I marched for the girls who have no freedom.

I marched for FEMINISM. Feminism is the radical notion that women are people. (Mary Shear).

I marched for all the women who could not march and would have wanted to.

And I marched for the ones who do not have a voice anymore. 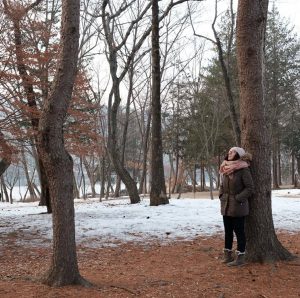